Under the High Patronage of His Majesty King Mohammed VI 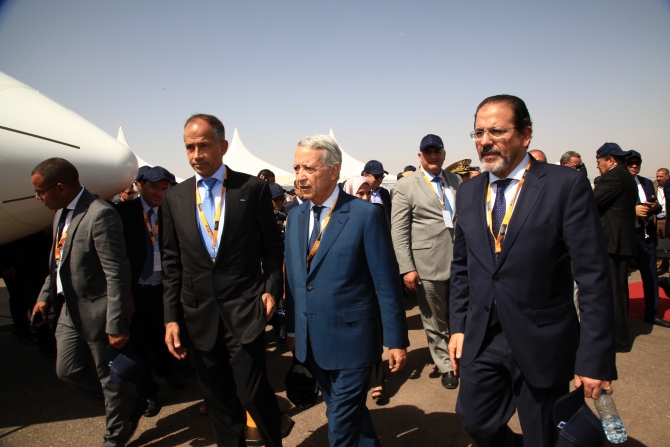 New Location Proves A Success
The second edition of the MEBAA Show Morocco was opened today by HE Mr. Mohammed Sajid, Minister of Tourism, Air Transport, Crafts and Social Economy, Morocco. Upon officially opening the event, the Minister toured some of the exhibitor stands with Ali Alnaqbi, Founding & Executive Chairman of the Middle East & North Africa Business Aviation Association (MEBAA). Among the exhibits that they viewed were Bombardier, Bell Helicopter and Swissport Executive Aviation.
Zouhair El Aoufir, CEO of Office National des Aeroports (ONDA) said, “Over the next two days we are proud to celebrate the collaboration between ONDA and MEBAA to encourage business aviation to flourish in the region.”
Morocco’s reputation in the business aviation industry continues to grow as major industry players recognise the opportunities it offers. As a strategic location with easy access to Europe, the Middle East and the rest of Africa, Morocco has become a popular destination for corporations such as Boeing looking to expand internationally, and the aerospace industry in the country benefits from ardent government backing. In addition, reports state that the country’s 2020 aerospace goals include bringing in 100 new investors, creating 23,000 new jobs and generating $1.6 billion in new revenue.
Business Aviation fleet size in the region has doubled over the past ten years.  Africa is forecast to receive aircraft deliveries to a value of $7 billion over the next ten years with over 80% of these predicted to be in the light or medium categories, according to the Bombardier Business Aircraft Market Forecast 2016 – 2025. The same report predicts compound annual fleet growth of 3.2%.
“We are thrilled with the first day of the MEBAA Show Morocco,” said Alnaqbi. “The quality of the visitors and the engagement that they have achieved with the exhibitors has demonstrated that the market demand for this event is growing in line with the industry.”
The MEBAA Show Morocco is held under the high patronage of His Majesty King Mohammed VI in partnership with the support of the Office National Des Aéroports (ONDA) and continues tomorrow, 13 September, at Marrakech Menara Airport.

Stay up to date

Subscribe to our free email updates.
You'll get about two emails per month. We'll never share your address.